IT’S THE TRUTH! More current and former beauty queens and aspiring models the world over read Pageantry magazine more than any other industry magazine. Pageantry magazine has been covering the world of beauty pageants and modeling competitions for over 43 years. Our coverage of national and international events is unparalleled. Pageantry has featured such illustrious pageants and modeling competitions as the Miss Universe Pageant, Miss America Competition, Miss USA Pageant , Miss Teen USA Pageant, Miss Earth USA Pageant, and Miss American Coed Pageant

Modeling? Look no further than the iPOP! Modeling and Talent Convention, the IMTA Convention, M.A.A.I., and more. Our esteemed group of expert writers will tell you everything you need to know to succeed… whether you are just starting out or sharpening your skills for that next big competition.

Order now, and find out for yourself why Michael Caine in the blockbuster film “Miss Congeniality” stated Pageantry magazine is known as the “Bible of the Industry.” 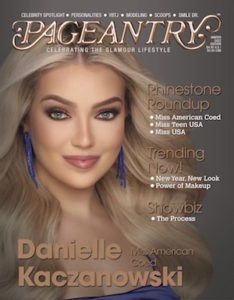 Your glamour lifestyle packed Winter 2022 edition of Pageantry magazine & PageantryDigital magazine, featuring the Miss American Coed Pageant from Orlando, Florida, and interview with Miss American Coed 2023 Danielle Kaczanowski could be on the way to your doorstep! This in-depth edition also includes our glamorous coverage of the Miss Teen USA Pageant and Miss USA Pageant from Reno, Nevada. Need more? OK… in addition to our coverage we sat down and visited with Miss Teen USA Faron Medhi following her historic win and her goals as Miss Teen USA. Next, you’ll love the positivity and determination of Miss USA R’Bonney Gabriel as she prepares for the Miss Universe Pageant in New Orleans.

Head into the competition season with our heralded columnists and discover Pageantry’s exciting Hair and Makeup secrets while enjoying the exciting pages of Celebrity Spotlight, Pageantry Personalities, Pageantry Patter, Spirit Award winners, and our exclusive Club Pageantry Winners Circle. And of course, all the expert advice you expect from your leading industry source including Modeling and Showbiz tips, The Smile Dr, and so much more. The new edition of Pageantry magazine will provide you with all the inspiration and insider secrets you need to succeed. Pageantry… Celebrating the Glamour Lifestyle… Celebrating 43 Years!

The 71st Miss Universe competition is the latest TV event making the move to streaming. The Roku Channel has sealed a one-year deal to be the official English-language home for Miss Universe, which will stream live from New Orleans on January 14, 2023, at 7 p.m. ET.

Among the changes in the move: Steve Harvey, who had hosted for five years as part of the pageant’s deal with Fox (with the exception of 2021, when that pact was paused due to the COVID-19 pandemic), also won’t be back. According to Miss Universe Organization CEO Amy Emmerich, a new host — expected to be a female — will be announced in the coming weeks.

“My goal was really to make sure we led with a female lens this next go-around,” Emmerich says. “We should hopefully have that to talk about soon… It was a rare opportunity to be able to kind of restart in a whole new place.”

Emmerich had just joined Miss Universe in January, and has been busy looking at ways to reform and refresh the organization. And with the U.S. English-language deal up (it continues to also air in Spanish on Telemundo), Emmerich said she was looking to reimagine Miss Universe’s global distribution.

“I would love to offer one large package and go global because the global audience is so massive, but we’re tied up in a lot of different territory deals,” she says. “That won’t end for another year. So, we said, OK, the best thing that can happen for this brand is go to a place that’s also starting anew. Right away WME suggested Roku. I’m familiar with [Roku originals head] David [Eilenberg] from the past and he had just joined there. From the first conversation, you kind of knew it was the place to be. Roku just always had a personality. They really are consistent with who they are, even with the original programming to come. And Miss Universe needed take some chances.”

Because it’s on a streaming service, the Miss Universe 2023 event will be seen live across the country. Emmerich said Miss Universe and Roku are currently looking at unique ways to play with commercial breaks and other telecast elements.

“Now that we have Roku, what exclusively can we do for them during this commercial space that that audience can feel like they’re seeing more of the inside, behind the scenes,” she says. “I joined here hoping to bring a level of transparency that I don’t think exists at the organization and Roku kind of loved that idea. It’s also a great time to just watch the data and see what works.”

R’Bonney Gabriel of Texas captured the crown of Miss USA 2022 during the live telecast from Reno, Nevada on October 2, 2022. Miss USA 2022 R’Bonney Gabriel will represent the United States at the Miss Universe Pageant scheduled for January 14. 2023, in New Orleans, Louisiana. R’Bonney Gabriel becomes the first Filipino-American woman to wear the crown of Miss USA. Miss USA 2022 is a fashion designer who designed her own ensemble. As stated by R’Bonney, “I am a fashion designer; I actually made the outfit I’m wearing,” she said. “I up-cycle pieces and recycle different clothing to be more sustainable in my industry because I feel it’s my duty. So I think that’s something we can all look for in our certain industries and in our homes — to be more sustainable.” 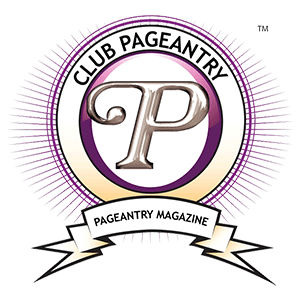 In addition, the women will each appear in their own individual covers [pictured left].

Miss Universe 2012 Olivia Culpo has built an influential platform and garnered millions of followers on Instagram, a space that she has used as a launching pad for many successful projects. Most recently, in response to COVID-19, Culpo created MoreThanAMask. The company is a line of fashion face coverings, and 100% of the proceeds go to Feeding America. Culpo’s résumé is endless. She is an advocate, fashion designer, actress, entrepreneur—and now an SI Swimsuit cover model.

“Olivia Culpo is one of the hardest working people in the industry. I have never seen her give anything less than 200% toward whatever goal she sets for herself. Her accomplishments speak to that and are vast and impressive,” MJ Day, the editor of Sports Illustrated Swimsuit, says. “It gives me great joy to celebrate such an exemplary professional and hardworking individual whose unapologetic enthusiasm will shine from the cover of our magazine. We are excited to have Olivia represent our brand in a way that celebrates the multifaceted women who pursue their dreams and fill the pages of our issue.”

Who’s Who in Pageantry 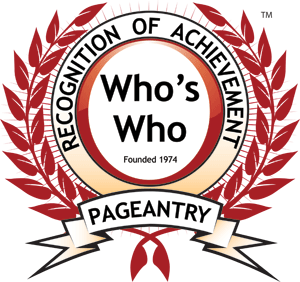 It’s Who’s Who In Pageantry: Recognizing Outstanding Personalities within the Glamour Lifestyle Industry…
and it’s by referral only!

And no… you cannot nominate yourself 🙂

The ALL NEW Pageantry Mall Dismiss